This page was adapted from the article, "Hornet Season is Here Early!," which appeared in Crop & Pest Report on August 5, 2021.

Hornets (or yellowjackets) belong to the family Vespidae. All yellowjackets sting and their stinging behavior is considered a defensive reaction when the colony is threatened. They can sting more than once because their stinger stays with the insect unlike with the honey bee. Yellowjackets are more aggressive during August and September and more likely to sting people. Although yellowjackets are actually a beneficial insect feeding on other insects, they often become a pest problem when nests are located near homes, schools, picnic areas, or playgrounds. Pest control is often warranted.

These wasps are social insects and build nests of paper-like material. Nests generally are located underground in mammal burrows, cavities or in between house siding. In the northern temperate climates, only the mated queen wasp overwinters from the previous year’s colony. Queens are inactive during the winter, hiding in protected places like under tree bark or attics. In early spring, the overwintering queen builds a new nest and lays an egg in each cell. Larvae hatch from the eggs and are dependent on the queen for food. The queen forages outside the nest and brings food (caterpillars and other insects) back to the larvae until pupation. Sterile female workers emerge from the pupae and take over nest building and brood rearing, while the queen stays in the nest. During late summer into early fall, adult males and newly produced queens leave their parent colony. The colony dies off, and only newly mated queens will find a protected place to overwinter.

Vespid wasps are active outside the nest during the daylight hours. Nearly the entire colony is in the nest during the evening and night-time hours, so control measures should be applied to the nest then. There are many insecticides labeled for control of hornets and yellowjackets. The difficulty is making the treatment without being stung. Usually, an aerosol spray of one of the many fast-acting wasp killers will quickly kill all workers present in the nest. Examples of fast-acting products are permethrin, synergized pyrethrins (Spectracide Bug Stop and other brands) or pyrethroid insecticides (such as, esfenvalerate - Ortho Bug-B-Gon Garden & Landscape Insect Killer; lambda cyhalothrin - Spectracide). A slower-acting insecticidal approach is to apply carbaryl (Sevin) dust directly onto the exposed nest and entrance hole. After treatment, check the nest for any activity the following day and re-treat if necessary. Nests should be removed to avoid attracting dermestid beetles at some later time and to keep wasp pupae from possibly reestablishing the nest. Yellowjacket nests can become an important source of carpet and other dermestid beetle infestations in the home. If dealing with yellowjacket nests in structures like homes, the nest entrance should never be plugged from the outside. If constrained, yellowjacket workers cannot escape to the outside, and they may locate or chew a new way to escape toward the inside of the home or structure, creating a possible stinging threat for people inside., so the nest should be removed whenever possible. When outside enjoying your picnic, avoid wearing bright colors and perfumes which are attractive to hornets and yellowjackets, and keep garbage away from the picnic table. 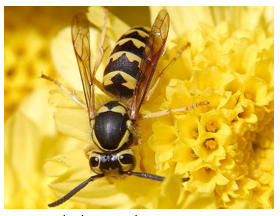