Choosing Mulch For Trees and Shrubs

Do you enjoy torturing plants? If yes, get some rock mulch and put it around your plants.

Rock mulch does nothing for a plant. A rocky bed may look good to us, but the plants are crying in pain.

Use shredded bark instead. It’s better for many reasons: 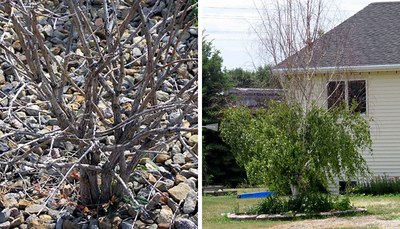 This burning bush got burned to death (excuse the pun) in a bed of rock mulch. The birch at right suffered from heat generated by rock mulch, which contributed to a severe infestation of bronze birch borer.

Rock mulch is terrible for plants—so why do we use it?

Some gardeners worry about weeds growing in shredded bark. True, shredded bark will allow more weeds compared to a barrier of jagged rocks and landscape fabric. However, weeds in shredded bark are sparse and pull out easily. A spray of Roundup once a year may be applied to control tough weeds like quackgrass.

Some gardeners are frustrated that shredded bark can blow away. Rarely is this a significant problem if the mulch is applied properly: 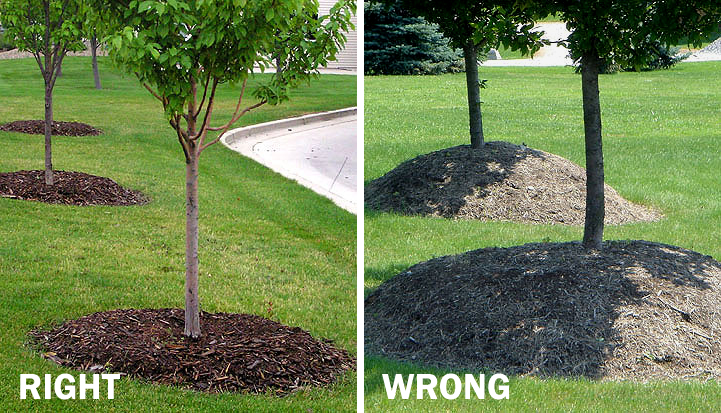 The right and wrong ways to mulch a tree. Left: Place minimal mulch at the trunk and gradually build it to a depth of up to 4 inches around the perimeter. Right: Avoid accumulating mulch near the trunk since this leads to trunk rot and attracts rodents that nest in the mulch and feed on the bark.

The next time you plant a tree or shrub, show it some love and surround it with shredded bark. You will be rewarded with a happy, healthy plant.

Revised from an article published in the NDSU Yard & Garden Report of August 16, 2013.