This page was adapted from the article, "Winter Injury on Spruce Trees" which appeared in Crop & Pest Report on May 12, 2022.

In spring, some spruce trees can show browning needles, often without a specific pattern to the damage.  A number of potential causes have been identified.  Biological problems have included Valsa canker (formerly Cytospora canker) of spruce, an insect called spruce bud scale, and one of the needlecast diseases.  Other pests such as spider mites or pine needle scale may play a part in the damage to certain trees, though we haven’t specifically seen them on any given tree yet.  Environmental problems such as the recent drought and the challenging winter have exacerbated the problem.

Multiple pests can be found a given tree and it’s often impossible to tease out how much damage was caused by a specific pest or environmental problem.  Therefore, treatment recommendations are difficult to make.  Nevertheless, there are some general recommendations.

For trees that have lost most of their needles, they’re likely to not recover no matter what we do.  For those trees that retain most of their needles, we need to make sure that we keep the trees otherwise healthy.  This spring’s snow and rain will go a long way towards alleviating the drought stress that the trees are suffering.  For trees that are in drought-affected areas of the state, they should be irrigated.  A long, slow soaking is better than multiple, brief additions of water.  Move the hose around, as the tree’s roots extend in all directions from the stem.  The roots go out far beyond the drip line of the tree crown, extending to as far as four or five times the height of the tree.  The ground should be moist, not saturated, after watering.

In summer, scout for pests such as insects and diseases, and be prepared to treat them as appropriate.  Scouting is important because treatment timing is critical to be effective.  Spraying for a pest at the wrong time of year is ineffective and is a waste of both time and money.

More information on the needlecast diseases of spruce, see The Old and the New: Two Needle Diseases of Spruce in North Dakota. 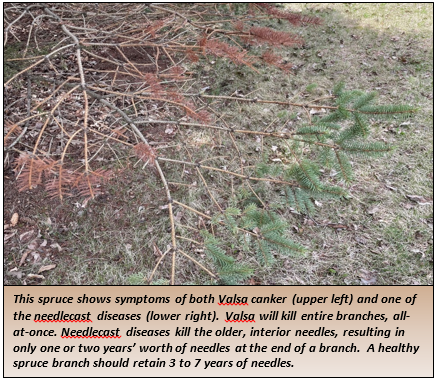