How To Wrap Trees For Winter Protection

I’ll never forget an autumn afternoon spent with my father wrapping trees. He took a roll of brown Kraft paper and wound it around the trunk. Then my father asked me to hold the paper in place while he secured it with twine.

The air was cool and crisp. The golden sun was resting low on the horizon. I was a boy working with my Dad. It was a perfect afternoon.

More specifically, we wrapped trees to protect the trunk from getting scalded by the sun.

A tree trunk receives no shade in winter. Its branches are leafless and the trunk is exposed. On a sunny afternoon, the sun casts its rays upon the trunk and heats it up. Temperatures on the sunny southwest side of the tree can be as much as 77°F warmer than on the north side. This heat causes the dormant cells beneath the bark to become active.

When the sun sets, the trunk rapidly cools. The activated cells freeze and burst, causing the bark to crack.

Look at maples in town (below). On the southwest side you often see a vertical crack on the trunk. Other sensitive trees include linden, mountainash, honeylocust, plum, cherry, crabapple and apple. 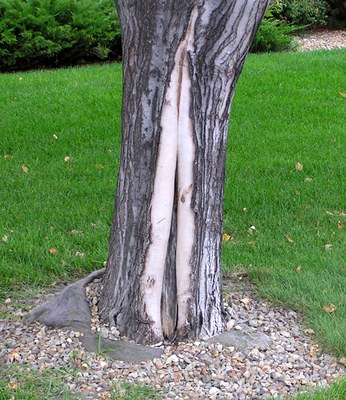 This vertical crack on the southwest side of a maple was caused by the trunk absorbing heat from the winter sun. Cells were activated beneath the bark, but later froze and burst open.

Wrap trees for at least their first two winters, until their bark develops texture. The sensitive trees mentioned above will benefit from protection for their first five winters.

Wrap your trees using Kraft paper, starting at the base and winding the paper up to the first major branch. Or, place white plastic tree guards around the trunks (below). This protection will reflect the rays of the sun off the trunk, keeping it cool. 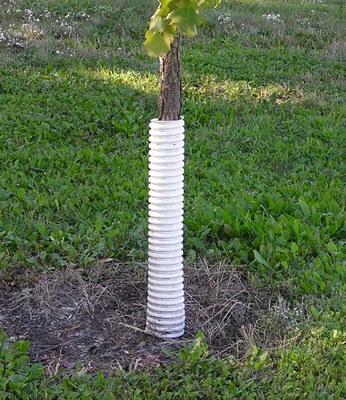 This white tree guard will reflect away the scalding rays of the winter keeping the trunk cool and free of cracking.

As a bonus, the tree wrapping/guard can help to protect against wildlife damage.

Unwrap the tree after the last frost in spring to let the trunk expand and prevent insect infestation.

Don’t use black tree guards. This absorbs heat, which is the last thing you want to do in winter.

Written by Tom Kalb, Extension Horticulturist, North Dakota State University. This is an updated article from an earlier version published in the NDSU Yard & Garden Report for September 22, 2014.