Millennium Is The New Leader in Asparagus

‘Millennium’ has emerged as the top choice of asparagus varieties in the Midwest. 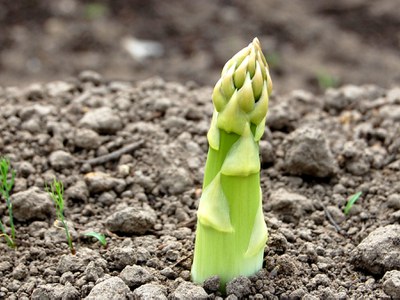 Asparagus spears are a delight to harvest in spring.

For several years, University researchers have recommended the “all-male” hybrids from Rutgers, including ‘Jersey Giant’, ‘Jersey Knight’ and ‘Jersey Supreme’. Walker Brothers, the producer of ‘Jersey’ asparagus crowns, has stopped propagating them. Retailers may have a limited supply of ‘Jersey’ varieties in stock, but we need to find an alternative in the long run.

Bred in Ontario, ‘Millennium’ has been grown successfully in Minnesota for several years. Trials conducted in 2013 in northern Minnesota showed it produced 2,094 pounds per acre compared to 1,287 pounds for ‘Jersey Giant’ and 1,233 for ‘Jersey Knight’.

Research in Michigan found plantings of ‘Millennium’ were slower to attain high yields compared to ‘Jersey’ varieties, but they later showed superior and heavy yields over a 15-year lifespan. Plantings show greater vigor and survival.

The yield advantage of ‘Millennium’ may be in part because it has a higher proportion of male plants compared to the ‘Jersey’ varieties. Male plants are desired because their energies are more focused on producing spears. Female plants spend part of their energy forming seeds. These seeds later drop, causing the bed of asparagus to get overcrowded and the spears to get smaller.

Large scale plantings in Michigan indicates ‘Millennium’ is better adapted to cold climates compared to ‘Jersey Giant’ or ‘Jersey Supreme’. It goes dormant earlier in the fall and emerges later in spring, reducing the risk of frost damage. ‘Millennium’ is hardy throughout our state.

‘Millennium’ has shown the ability to grow well in a wide range of soil types, including heavy soils.

‘Millennium’ shows intermediate resistance to rust, the most damaging disease in asparagus plantings.

Traditional open-pollinated lines such as ‘Mary Washington’, ‘Martha Washington’ and ‘Purple Passion’ are still available. These varieties have a much higher percentage of female plants. They are less productive, and their spears are less uniform in size compared to those of hybrids.

Hybrids developed in California do not have the hardiness and vigor we need in North Dakota.

Gardeners typically start asparagus plantings using 1-year-old roots. A light harvest is available in the second year, a larger harvest the third year, and a full harvest thereafter. Due to the COVID-19 pandemic, gardeners are encouraged to order early to ensure the availability of roots.

University of Minnesota. 2021. Jersey asparagus varieties being discontinued – next steps.