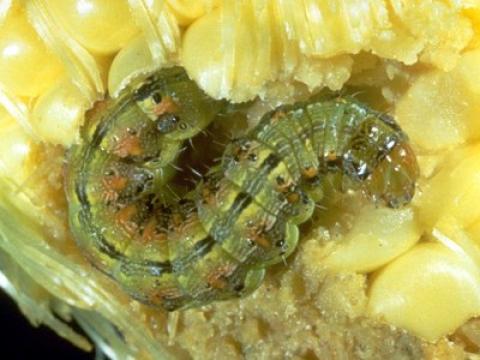 Fresh sweet corn is one of the best tastes of the summer. Put a little butter on an ear and chomp away!

The only thing that ruins this experience is when you open up the husks and find a worm inside.

We have tools to control earworms and borers. Insecticides such as carbaryl (Sevin) can be used, but most families prefer not to use toxic chemicals in their gardens. There is a safer way.

In the 1940s—before the age of synthetic insecticides—gardeners put a dab of mineral oil on the silks at the tips of the ears. It worked. The worms suffocated on their trek from the silk tips down to the kernels.

Today, vegetable or corn oil is recommended. Even better, add a touch of Bacillus thuringiensis var. kurstaki (Btk) to the oil. Btk is a natural bacterial insecticide that is widely used by organic growers (trade names include Dipel and Thuricide). Neem is another organic product that works well.

A formulation of 1 part Btk or Neem with 20 parts oil is recommended. Apply 5 drops (0.5 ml) from an eyedropper directly to the top of each ear. 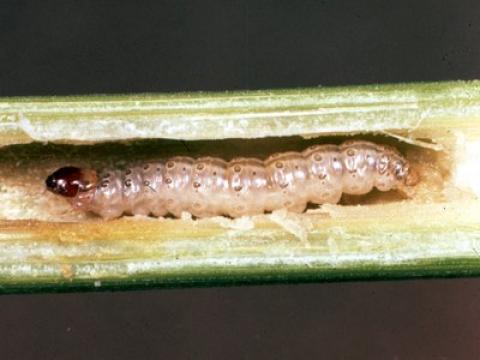 Timing is critical. Spray when silks have reached their full length and began to wilt and turn brown (this is 5–6 days after 50% of the corn has begun to show silks). Earlier applications can interfere with pollination and lead to poorly filled ears. Later applications will lead to poor control, as the earworms will have escaped into the ears by then.

On a side note, did you know earworms are cannibalistic! Cool! That’s why you usually see only one worm at the tip of the ear. Let’s kill that merciless cannibal!

Commercial growers in the Midwest are finding earworm moths in their traps now. Moths are tan and often have a dark spot on each wing. The later we go in the season, the more likely the cobs will be visited by the earworm moths.

Borers can be a problem, too. They burrow in the stalk and tunnel into ears (photo). Look for shotholes or brown frass in the whorls at the time the tassels appear (photos below). If 15% of more of the plants show damage, spray inside the whorls with Btk, neem, or carbaryl. Spinosad is another organic option. 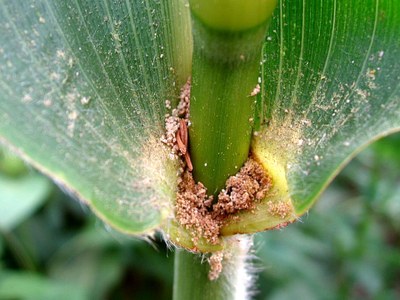 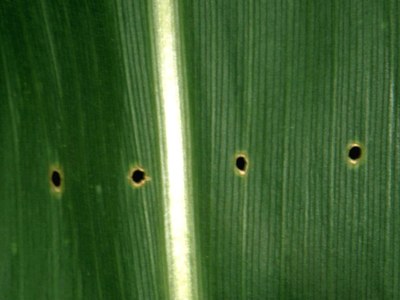