Sulfur deficiency occurs commonly on very sandy soils, but recently we found a site at Lake Park, MN, that has a loam texture with 3% organic matter that is deficient in sulfur for alfalfa production. Initially we thought it may be poor nodulation leading to poor nitrogen fixation since the typical symptom was yellowing of the leaves, shortened internodes, and apparently stunted growth, especially obvious in the fall. However, the alfalfa did not respond to a test strip of urea. At the same time, a test strip of S-15 resulted in nearly double the forage production. We therefore wanted to determine the forage yield and quality as influenced by sulfur fertilization.

This experiment was initiated in 2005 on a 3-year-old stand of alfalfa-orchardgrass mixture. The treatments included five sulfur treatments as listed in Table 1 and an unfertilized check. The plot size was 5 by 25 ft. Treatments were laid in the field utilizing a randomized complete-block design with four replicates. Weeds were nearly nonexistent so no weed control was done. The experiment was harvested three times in 2005 and 2006. Harvests in 2006 were taken at the late bud maturity stage for alfalfa in the first harvest, 40% bloom in the second harvest and 80% bloom in the third harvest. Rainfall was deficient for good growth of alfalfa in the second and third harvests, little rainfall occurred during the growth period of the third harvest. Forage was harvested from each plot with a Carter flail harvester set at a 2-inch stubble height. Samples from two replicates of the first and third harvest were taken, dried at about 45oC, ground to pass a 1-cm screen in a Wiley mill, mixed extensively, subsampled, stored in glass bottles, and submitted to the Animal and Range Sciences Department for forage quality analysis using wet chemistry. Crude protein (CP), acid-detergent fiber (ADF), and neutral detergent fiber (NDF) determined. Hemicellulose was calculated as NDF-ADF and relative feed value calculated using the standard formulas. 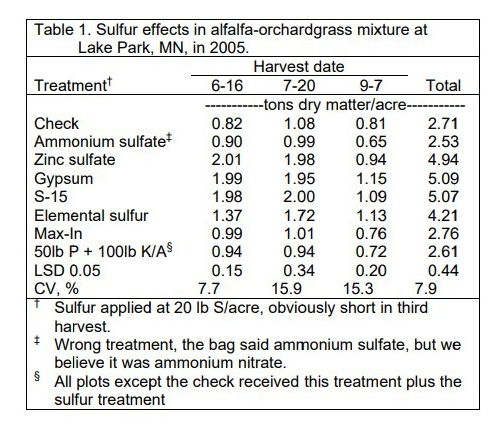 Forage yields in 2005 are presented in Table 1. Zinc sulfate, gypsum, and S-15 applied at 20 lb S/acre increased forage yields by about 85%. Elemental sulfur did not become available fast enough to meet the plant’s demand, but it did increase the forage yield significantly. Max-In, a liquid micronutrient mixture applied at six inches of growth, had no effect on the forage yield. The ammonium sulfate treatment is not correct because we believe the bag was miss labeled and was ammonium nitrate instead. Forage yield would have been greater except the 20 lb S/acre was used in the first two harvests and sulfur deficiency was again evident. 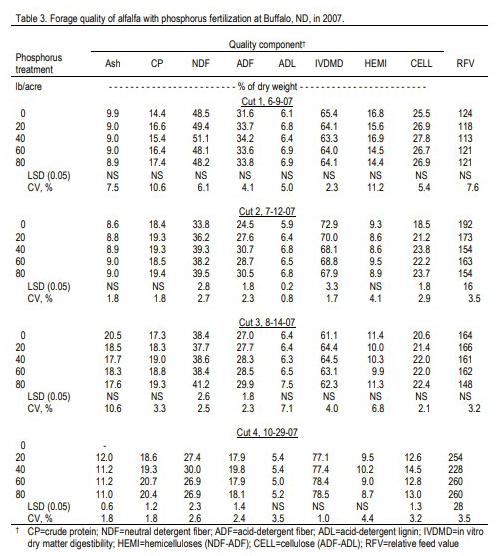 Sulfur fertilization had no consistent effect on the fibrous components. The ADF, NDF, hemicellulose, and RFV were unaffected by sulfur fertilization. One might think that the reduced growth by sulfur deficiency would produce a higher- quality forage, but we did not find this to be true.