This page was adapted from the article, "Pyrethroid Complaints of Diamondback Moth Control in Canola," which appeared in Crop & Pest Report on August 26, 2021.

In 2021, several farmers and crop consultants complained about the lack of control of the diamondback moth (DBM) with pyrethroid insecticides in canola fields located mainly the northeast area (Walsh to Rolette Counties) of North Dakota. Fields were sprayed up to two times with a pyrethroid insecticide without adequate control. Canola fields appeared white due to larval feeding removing the green epidermis of the stems and pods. 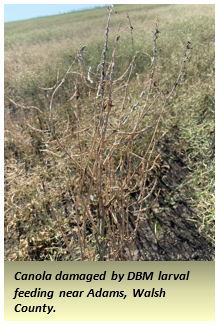 Diamondback moth migrates into North Dakota each year and can occasionally be a major insect pest of canola. Diamondback moth larvae feed on the leaves, buds, flowers and pods of canola. The severity of infestations varies from year to year depending on when moths arrive, how many flights occur into ND and the density of the populations.

We recommend that farmers avoid using any insecticides in the pyrethroid class 3A since they will not provide effective control, and to rotate to a new mode of action. Here's a list of alternative modes of action / insecticides registered for DBM in canola ND: