When freezing temperatures arrived in the state earlier this month most of the corn was not mature. Important questions arising from this event include: What kind of yield loss resulted from this early end of season? Will the crop’s test weight be low? Will frost damaged immature corn dry-down more slowly than mature corn? As with most agronomic questions, the answers to these questions are, it depends!

Estimated Yield Loss: Yield loss from an early season frost depends on the crop’s growth stage and the level of damage inflicted by the freezing weather. Clearly, a corn crop that is less developed will have greater yield loss than one that is approaching maturity. In early September, the stage of maturity of the corn crops in the state varied depending on where and when they were planted and the relative maturity of the hybrid used. Early maturing hybrids (for their zone) that were planted before the middle of May may have reached maturity by the time of the frost as most areas of the state were ahead of normal for growing degree day (GDD) accumulations. Full season hybrids or fields planted at the end of May, however, were probably a week or more from maturity. Figure 1 shows the growing degree day accumulations for the period May 16th through September 9th (date of a potentially damaging frost). Superimposed on this map is a list of the approximate GDD accumulations required for hybrids of differing RMs to reach black layer. This information should allow one to estimate how close a field was to maturity if it had been killed by frost on September 9th. In corn plots sampled near Prosper on September 15, our 82-day hybrid had 29% moisture, our 90-day hybrid 33% and our 95-day hybrid 40%. The 95 day had obviously not yet reach maturity, but was approaching ¾ milk line. The second factor I mentioned that influences yield loss is the amount of damaged sustained by the crop. If only the leaves are killed, reserves in the stem can still be mobilized to the developing grain. Moreover, if only part of the leaves were damaged, the remaining leaves will continue to contribute to yield, though the rate of grain fill will be reduced proportional to the amount of leaf area damaged. In my limited travels in Cass County I have seen fields with minimal leaf damage and others that were completed killed (Figure 2). At our research site near Thompson, only some of the leaf area was damaged. 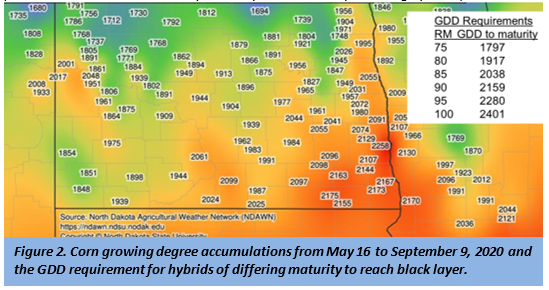 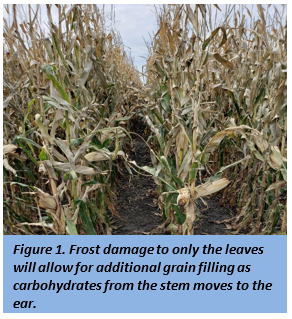 Table 1 summarizes the type of yield losses associated with two different levels of damage at differing stages of corn development.

Impact on Test Weight: Test weight is a measure of the weight of the grain in a given volume. Immature kernels are not fully filled and do not compact as well nor are they as dense as mature kernels. Many growers experienced discounts at the elevator last year due to low test weight corn and are now concerned with a repeat after this early frost. I found limited data on the relationship between kernel maturity (at time of plant death) and test weight. One relevant study is summarized in Table 2. These data suggest that corn that reaches the half milk line (~40% moisture) will likely have a reasonable test weight, but anything more immature will probably have unacceptable test weight. The 95-day hybrid we have been sampling from our plots in Prosper that had 40% moisture last week, had dried to 37% moisture yesterday and when dried overnight in our drier had a test weight of 54 lbs. This supports the data in Table 2, and suggests that one should expect some test weight reduction when plants in plants killed at or before the 50% milk line, but serious reduction occur when plants are less developed than this stage.

Maturity Impacts on Rate of Drying: During grain filling, the moisture content of living kernels decline as new carbohydrates are added to the endosperm and through evaporation. After plant death, however, moisture loss will only occur through evaporation. Therefore, initially immature kernels will dry slightly slower than mature kernels. However, the difference in the rate of moisture decline is minor and less of a concern than the fact that the immature corn is starting the drying process at a very high moisture content. As I mentioned two weeks ago in my Crop and Pest report, the factors that affect the rate of field drying include: the initial moisture content of the grain, air temperature, relative humidity, rainfall, dew, wind speed and kernel characteristics. I have found the web-based tool developed by Iowa State University called the Corn Dry Down Calculator (https://crops.extension.iastate.edu/facts/corn-drydown-calculator) to be very helpful in predicting the drying process. This calculator predicts that the 95-day hybrid we have been monitoring at Prosper that was at 37% moisture yesterday will reach 20% moisture on the 16th of October. Warm and dry weather will certainly hasten this process. The more gradual drying that occurs in the field usually results corn with a higher test weight than when it is dried using high temperatures.