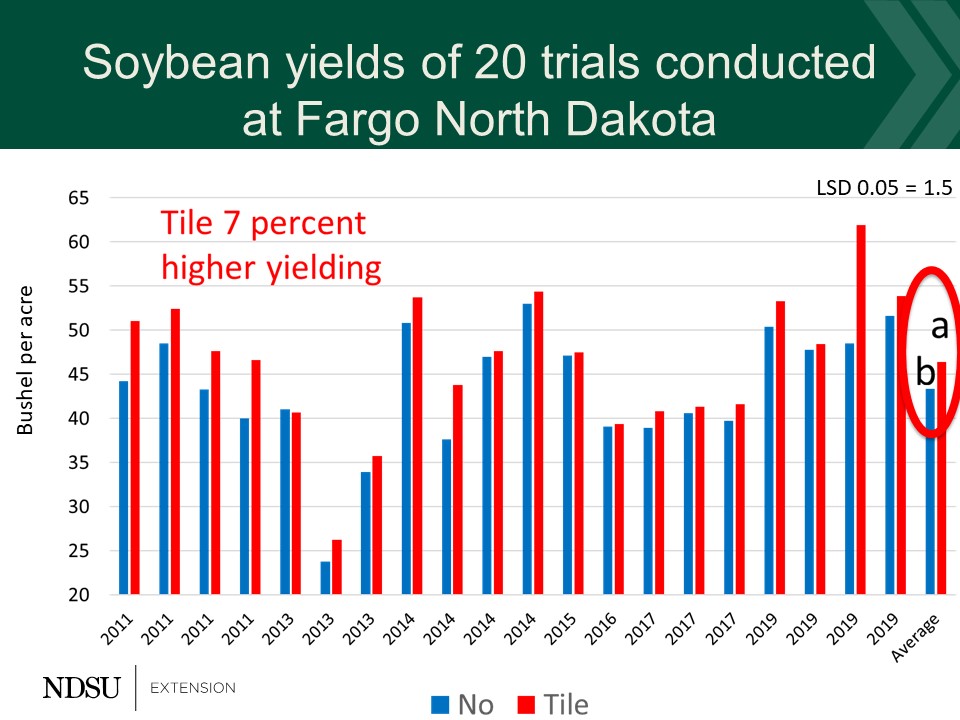 The research has and will investigate the yield response of a range of soybean varieties with several management practices to tile drainage on a annual basis. The soybean is grown under tiled and non-tiled conditions. In addition to measuring yield, crop plants will be evaluated for disease and other growth characteristics. Soil scientist will monitor water table, soil properties, and temperature between tiled and non-tiled experimental units. Results so far a yield increase of 7% comparing tile drainage with the not drained control. In this case the tile and non tiled research plots were planted on the same day in each research year, depending on the season (see graph).

Description of the importance of the project

In North Dakota, from the 1990’s through 2019 excess water has significantly impacted crop production in the region. Besides acres not seeded due to water logged conditions, excess water caused yield losses on acres that were harvested. For instance the fall of 2019 was wet and harvest in many fields was delayed. Perhaps the most compelling evidence that excess water is the major factor contributing to reduced yields comes from farmers, themselves. University of Minnesota Extension staff in northwest Minnesota conducted in-depth farm diagnostic visits on 24 farms in 1999 and 2000. These farmers uniformly ranked excess water as their number one production problem, with no other factor coming in a close second. Computer modeling of tile drainage in the region (Conducted by Dr. Sands, U of M Extension Engineer) suggests that delayed planting may be one of the most significant impacts of excess water and typically results in a lower crop yield. Also in season saturated conditions can reduce the yield potential of crops including soybean. There is an increased interest in subsurface water management but limited research in the region has looked at the soybean varietis, iron chlorosis, planting dates, and phytophtora root rot between tiled and non-tiled conditions and the effect on yield.

Relationship to Past Projects:

Although surface drainage is a component of a successful water management system, tile drainage is also a very important water management practice in many parts of the Midwest and elsewhere. Tile drainage can help to establish more optimum conditions for field operations and crop growth by lowering the water table in poorly drained soils (Skaggs and Van Schilfgaarde, 1999). Limited studies on wheat response to drainage have been conducted and show significant response of wheat to water table depth (Cannel, et al., 1980). Field research at Lamberton, Minnesota indicated that under favorable climatic conditions, cereal rye substantially reduced artificial subsurface drainage nitrate-nitrogen (nitrate-N) losses when planted after the fall corn harvest in a corn–soybean crop rotation (Feyereisen, 2005). Iron Deficiency Chlorosis (IDC) is a major issue in the soybean production areas of eastern North Dakota and northwest Minnesota. Moisture is a major factor that affects the severity of IDC (Franzen and Richardson, 2000). Phytophthora root rot caused by Phytophthora sojae might be a serious problem when the soil is excessively wet (Berlin Nelson, NDSU Soybean Plant Pathologist, personal communication and Nelson et al. 1996). Tolerance to water-saturated soil and role of resistance to Phytophthora sojae was reported by Helms et al. (2007).

Saturated soil conditions can stress plants and may limit plant growth and yield (Scott et al., 1989). Limited oxygen in soils has a negative effect on plant growth (Pezeshki, 1994). Fehr and Caviness (1977) reported a 20% soybean yield loss after three days of saturated soil conditions at the V2 and V3 stages. Studies by Dr. Helms, retired NDSU soybean breeder, indicated an interaction between soybean varieties grown under saturated and natural rainfall conditions. The average yield of 40 soybean varieties under saturated conditions was 26.3 bushel compared with the natural rainfall yield of 33.2 bushel per acre, which is a 20% yield reduction for the beans grown under saturated conditions.

Some farmers have observed significant yield responses to tile drainage using combine yield monitors, in areas where tile drainage is common.  Although tile drainage is a very popular water management practice in the corn belt and southern Minnesota, there has been limited tile installation in North Dakota and northwest Minnesota. Information from this region (ND and NW MN) from farmers who have installed tile drainage suggests that there are some real benefits to be gained from this subsurface drainage. Farmers maintain that their tiled fields are now those where field operations take place first, instead of last.  However, flat topography, tight soils, economic uncertainty, and a tradition of surface drainage only, still limit its more widespread adoption in the region.  Both technical and economic feasibility must be clearly understood before tile drainage can become a widely accepted water management practice in the eastern part of North Dakota and northwest Minnesota.

Earlier planting, particularly for cool season crops such as field pea, canola, and spring wheat, often results in higher yields because the crop may avoid the high temperatures during the critical phase in its development.  Tile drainage may reduce some field operations and other input costs in addition to improving yield.  Producers with tile drainage in their fields, list a number of benefits they receive from tile drainage including: lower fuel cost to work the tiled ground, less wear and tear on equipment, timeliness of all field operations, better and more uniform crop stands, better weed control, fewer field ruts and less soil compaction, and better overall soil health.