This page was adapted from the article, "Braconid Wasp Cocoons Common," which appeared in Crop & Pest Report on August 4, 2022.

Braconid wasp cocoons have been observed on wheat/barley awns and on soybean leaves. Are these cocoons a friend or a foe? These wasps are considered a "good" beneficial insect in the family Braconidae.  The tiny parasitic wasps (or parasitoids) lay multiple eggs on the body of caterpillars, such as armyworms or loopers. Eggs hatch into tiny larvae, and they eat the insides of the caterpillar, thus killing it. Parasitism by the braconid wasps often causes the caterpillar to crawl to the tip of the plant. Mature larvae of the wasp emerge in large numbers from the dead caterpillar and then spin these cocoons outside the caterpillar body on plant parts like awns of cereal crops. A braconid wasp will eventually emerge from each cocoon and search out more caterpillars to attack and kill. 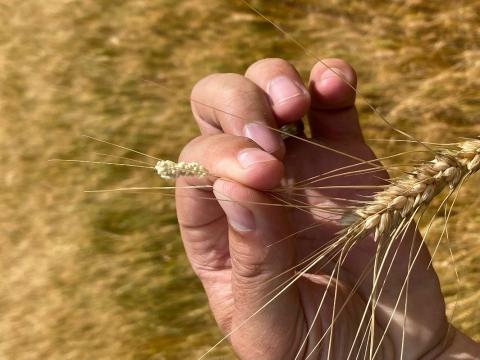