This page was adapted from the article, "Grasshoppers and Summit Disease," which appeared in Crop & Pest Report on August 11, 2022. 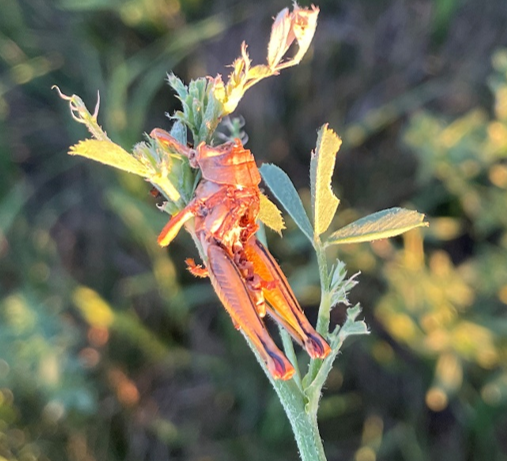 In August 2022, dead grasshoppers were observed on the tops of plants with their legs grabbing tightly around the stem. These grasshoppers are infected with a naturally-occurring fungus disease called Entomophaga grylli (commonly referred to as "summit disease"). Grasshoppers become infected from spores, which stick to the bodies as they seek food. These spores germinate and penetrate the insect cuticle. The fungus then multiplies in the blood and grows on internal organs. At about the time the grasshopper dies, its body is full of several million resting spores. As the cadaver disintegrates, these resting spores are disseminated on the ground, germinate, and produce more sticky spores, thus spreading the disease. This disease is capable of causing high mortality in grasshopper populations, but these epizootics (outbreaks) are usually sporadic and localized and generally occur late in the season after economic damage from grasshoppers has occurred.