This page was adapted from the article, "Hessian Fly Problems in Wheat ," which appeared in Crop & Pest Report on September 22, 2022

Hessian fly was observed infesting spring wheat near Olga in Cavalier County. They were weakening the stems causing some to break or lodge usually right above the second node. Most stems were broken, with 1-2 flaxseed-like maggots (Figure 1) but some stems had as many as 6 maggots (Source: Jeremy Sauer, AgriVantage Crop Consulting). The field had a significant infestation, almost 5% of heads were lodged or not harvestable. Northwest Minnesota also reported high pressures of Hessian fly near the Beltrami area and the least amount of pressure in the fields closest to Crookston (Source: Dr. Jochum Wiersma, UMN). 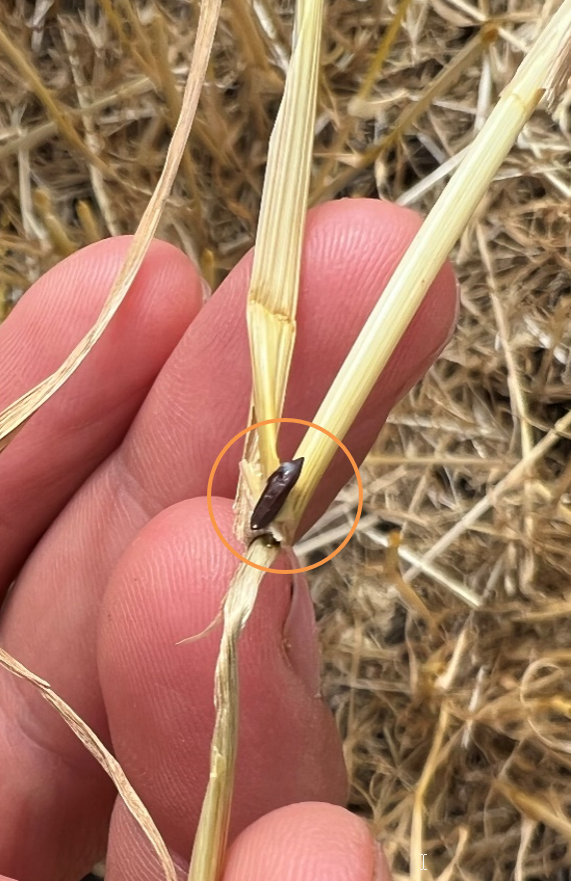 Hessian fly has two generations per year in the Northern Great Plains. The fall flaxseed stage larvae that we are seeing now will pupate and then the second-generation flies emerge in late August into September. Female flies search for suitable hosts to lay eggs in like winter wheat, volunteer wheat, rye cover crops, grassy weed hosts and other seeded grass crop in the fall.

Larvae will hatch from the eggs in 3 to 10 days and feed on the plant for two weeks developing into the flaxseed stage. They overwinter in the flaxseed stage. Fall planted grass crops that are infested with Hessian fly are stunted, and plants will generally die in the four-leaf stage during the winter. Next May, adult flies will emerge and females will lay eggs in spring planted grass crops to continue their life cycle.

Some sustainable pest management strategies include: