This page was adapted from the article, "Red-Headed Flea Beetle in Soybean, Corn and Wheat," which appeared in Crop & Pest Report on July 28, 2022.

Red-headed flea beetle (Systena frontalis) can cause defoliation in soybeans and chewing on silks in corn. NDSU has also received one report of red-headed flea beetle in wheat. The red-headed flea beetle is about 1/6 inch long and dark black with a reddish head and readily hops around. It feeds on over 40 different host plants including cabbage, beans, beets, corn, alfalfa, potatoes, nursery crops, cranberry and many weed species. It overwinters in the egg stage in the soil. Eggs hatch in June and larvae feed on the roots. Larvae pupate and then adults emerge in July-August and feed on foliage until September. Adults deposit eggs in soil, which overwinter. There is only one generation per year. 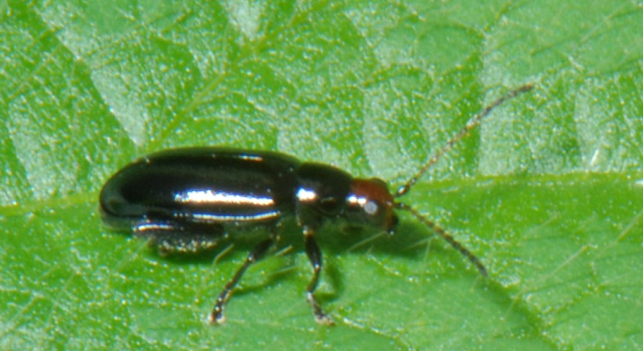 The red-headed flea beetle is not typically an economic insect pest in soybeans, corn or wheat. It has been reported in Minnesota and South Dakota. Extension reports from other states indicate that the adult stage is readily controlled by foliar insecticides registered in different crops. An action threshold for determining the need for a rescue treatment would be based on percent defoliation and the stage of soybean: 30% in vegetative stages (prebloom) and 20% in flowering to pod-fill. If pod feeding is observed then 10% defoliation. 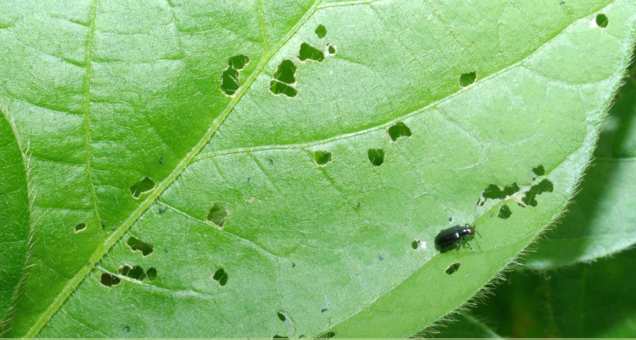 While there isn’t any developed threshold for the red-headed flea beetle in corn, we can use the adult corn rootworm threshold of 25-50% of the plants with clipped silks during pollen shed as to when control would be justified. With the high market value of corn, the lower percentage would be more feasible. This flea beetle is becoming more common of an insect pest of soybean and corn.