This page was adapted from the article, "Wireworm Control Options" which appeared in Crop & Pest Report on May 12, 2022.

Wireworms are a resurging pest problem in North Dakota, particularly west of the Missouri River in areas with no-till and continuous small grain production, and tight rotations with small grains and other crops. Since soil temperatures are above 50⁰F now, wireworms are starting to chew on roots. They go through several larval growth stages over several years - thus, there are always multiple ages present, such as small young larvae and larger mature larvae. Wireworms prefer grasses and grass crops, but will feed on the roots and seedlings of other crops when their preferred host plants are not present. Stand loss in sunflowers and other row crops, even under light to moderate wireworm pressure, can be substantial due to the fact that sunflowers are seeded at low rates and because attacked seedlings usually die. 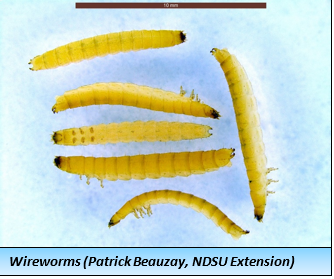 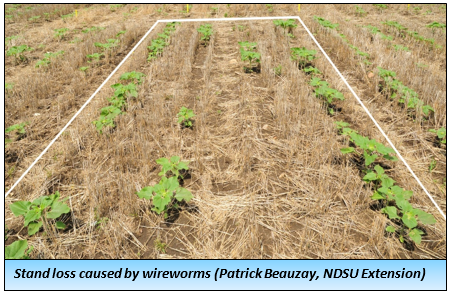 Systemic neonicotinoid seed treatments, such as thiamethoxam, do not cause significant wireworm mortality. Rather, wireworms that ingest a neonicotinoid will become moribund (sick) and stop feeding for a while. A seedling may live or die depending on the timing and extent of feeding injury. Germinating seedlings are most vulnerable. Seedlings that do survive may exhibit delayed growth and will ultimately produce little or no seed.

Pyrethroids also do not cause enough mortality to reduce overall wireworm populations. Pyrethroids work like a repellent to foraging wireworm larvae. Seedling root growth within the in-furrow application zone is protected, but a seedling is still susceptible to wireworms attacking from above the root zone. 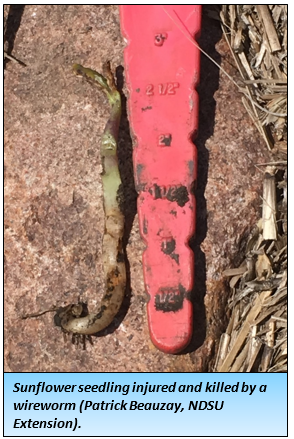 Sunflower Wireworm Project:  NDSU Extension Entomology has tested thiamethoxam insecticide seed treatment and in-furrow pyrethroid products and rates in an effort to find the best control measures for sunflower producers. Our research demonstrated 15% to 30% stand reduction when using thiamethoxam compared to 40% to 60% stand reduction using no insecticide seed treatment or in-furrow insecticide. However, in dry years such as 2021, seed treatment performance was poor. In 2021, stand loss when using thiamethoxam was not different from the untreated check - both sustained 40% stand loss. This is likely due to insufficient soil moisture during germination. Neonicotinoids require adequate soil moisture to dissolve the chemical from the seed coat so that it can be taken up by the roots and translocated throughout the seedling. Using a neonicotinoid seed treatment during years with adequate soil moisture will give some systemic protection against stand loss.

At present, two pyrethroid active ingredients are labeled for in-furrow use in sunflowers:  bifenthrin (Capture LFR, Capture 3RIVE 3D, Ethos XB, Ethos 3D) and zeta-cypermethrin (Mustang Maxx). In years with adequate soil moisture, in-furrow pyrethroids had slightly better stands compared with thiamethoxam, but the differences were not significant. Nor did we find significant differences between low (4 fl oz/acre) and mid (8 fl oz/acre) rates of bifenthrin and the single labeled rate (4 fl oz/acre) of zeta-cypermethrin. In 2021, in-furrow pyrethroid use resulted in significantly less stand reduction (about 20%) compared to 40% stand loss using thiamethoxam alone.

Sunflowers can tolerate seedling stand losses of up to 25% with only a 5% yield loss. In our studies, we did not find significant yield losses between in-furrow pyrethroids and thiamethoxam seed treatments. However, yield losses in affected areas may be greater due to root feeding injury on surviving plants and lower competition against weeds. Thanks to support from the National Sunflower Association.

In summary, we recommend the following practices to minimize stand loss and reduce wireworm populations.